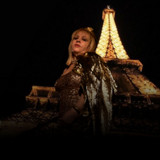 NELLY DECHRISTY of her real name Nelly Christiane ABDOU is a French singer (author, composer and performer). She is also a guitarist and percussionist. She composes her own music and writes her own texts.  Born in Algiers (Algeria) of a French mother from Algeria ("Pieds Noirs") and a Kabyle father. She is a trained engineer and multilingual. She tells through her music her journey, her fights, her cultural mix and her travels around the world. As a committed artist, she fights for different causes that are all related to her life. In her EP Freedom released in October 2020, her songs "Freedom" and "Soleil" are about the repressions she experienced in Algeria as a non-Muslim woman. In her song "Femmes Libres", she also fights against violence against women, of which she was herself a victim in the past. The artist fights against the suffering of the homeless, and she dedicates her song "Les sans-abris... ces oubliés" to them. In her title "Dame de fer" she uses a metaphor between the Eiffel Tower and her past as a businesswoman through the nickname that was attributed "La Dame de Fer". Nelly Dechristy creates her independent label "Nelly Dechristy Music" in 2020. Nelly Dechristy will release her Triple Album next October (October 2021).