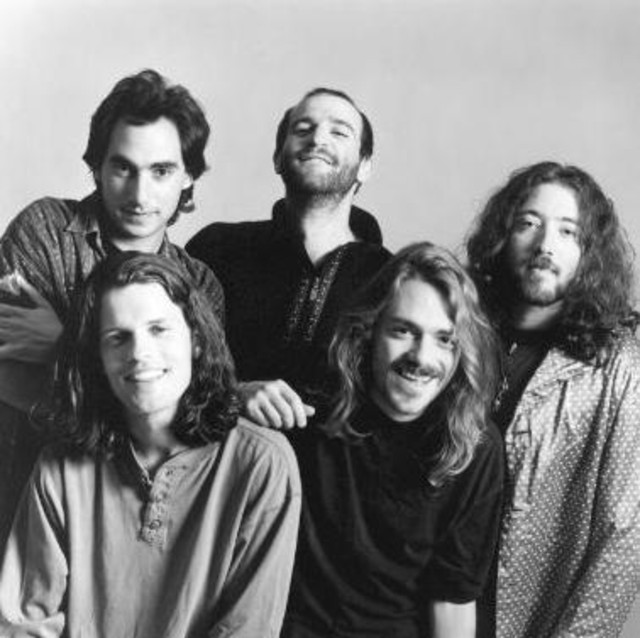 God Street Wine, a New York-based jam band in the tradition of the Spin Doctors and Blues Traveler, blend funk, reggae, folk-rock, post-punk, pop/rock, and blues-rock into a cohesive whole that is unique and original. God Street Wine formed in New York City in the late '80s and lived there until they moved to Westchester County, NY, in 1991. Comprised of Lo Faber on guitar and lead vocals, Aaron Maxwell on guitar and lead vocals, Dan Pifer on bass guitar and vocals, Jon Bevo on piano, organ, and vocals, and Tomo (or John Thomas Osander) on drums, God Street Wine played their first show on December 13, 1988, at the Nightingale Bar in New York City. They became legendary for putting on shows in excess of three hours, and with their two guitarists and reliance on improvisation, began to draw comparisons to another great twin-guitar band, the Allman Brothers. Even though God Street Wine's sound was considerably less bluesy, the band wasn't afraid to take chances in front of a live audience, not unlike the Spin Doctors or Blues Traveler. They maintained a large mailing list, in excess of 15,000 names, and continued developing a dedicated fan base often referred to as "Winos." It was this grassroots following that attracted the attention of record executives, not unlike the way Phish took off up in that band's home state of Vermont. God Street Wine's first album, Bag, a self-produced affair, was released in 1992. They followed it up with a live compilation, Who's Driving?, in October 1993 on the Ripe and Ready label. After attracting the attention of Geffen Records executives and a management company, McGhee Entertainment, they signed with Geffen in January 1994 and released $1.99 Romances in September on a label co-venture between Geffen and McGhee. Since no one at Geffen knew the band, there was little promotion or advertising of the record. They signed with Mercury Records in 1995 after an executive there caught them at the Beacon Theater in New York. The partnership produced Red the following year and the eponymous God Street Wine in 1997. The group continued to tour until 1999 and disbanded the following year. They released Good to the Last Drop, a collection of highlights from their farewell tour, in July of 2000. ~ Richard Skelly, Rovi