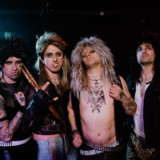 With introspective lyricism and musicianship, alternative rock/grunge album, The Sleep of Reason Produces Monsters carries listeners through the struggles of life, death, love, depression, anxiety and religion. When former members of Wayfarer, Jacob Blondin (Drums) and Frankie Chuilli (Guitar/Vocals) set out to create a new project, they hadn’t known exactly what sound they wanted to create. Jason Pascucci (Lead Guitar), and Andrew Quinn (Bass) joined the ranks of the band which would come to be known as DEARBONES, and with these additions, the band has created their first masterpiece: The Sleep of Reason Produces Monsters (Released October 31st, 2018) Each member’s unique styling, influences, and ideas can be heard throughout the album. Heartfelt vocals meet hypnotizing bass lines. Emotional (and at times, heavy) guitar riffs coalesce with percussion that resonates in the soul of the listener.