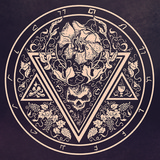 Like the enigmatic & deadly winter flower from which the project takes its name, the ancient Greeks called the Helleborus “the plant of fauns”. Heavily influenced by the Orphic Mysteries, traditional western witchcraft & folklore. The band pushes the exploration of orthodoxy black metal into the uncharted territory of sensual duality with a focus on occult herbalism & sexual mysticism. Following the debut release ‘The Carnal Sabbath’ & the liminal single ‘Prayer Of The Undying’, Helleborus have now released their sophomoric work ‘Saprophytic Divinations’. Saprophytic a term given to fungus or plants whom grow or eat from decaying matter. We explore the concept of prophecy or divine communications blooming from the macabre.