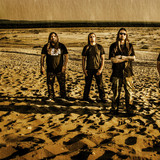 Horrorscope is a veteran thrash metal band with a fresh formula stared now! The most well known Polish thrash act is back with a vengeance. With their latest release “ALTERED WORLDS PRACTICE ”, they unleash ferocious tracks that incorporate the essential elements of the classic thrash sound with this new formula. The songs are full of aggressive riffing, fast, furious tempos, blistering lead guitars, and in-your-face vocals. Combined with high quality studio production Altered Worlds Practice is a sonic assault that fans of Testament, Onslaught, Hatesphere are sure to enjoy. This follow up release to “Delicioushell” CD (2014 – Defense Rec.) will force you to band the head!.<br>The latest CD of Silesian thrashers from Horrorscope Altered Worlds Practice is available from fall 2017. The material was recorded from April to August 2017 in the reputable ZED Studio situated in the exotic area of the only one desert in Poland - Bledowska Desert (according to legend, the desert was created by the Devil, who wanted to bury the nearby Olkusz silver mine in sand). Under the watchful eye of Tomasz Zed Zalewski who supervised the whole recording process, Horrorscope decided on recording the album in the traditional way (no VST plug-ins). Special attention is paid to the authentic, tremendous, powerful and lively sound of the group which has always been their trademark.