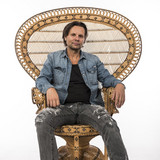 Lars Boquist went solo 2016 and released his first album Larser Than Life. The album was mostly instrumental. But with the new album Water, together with his band The 1712s, it will be songs with vocals (except for the Toto cover Child’s anthem). The style is more or less the same as his previous work with bands like Dizziness, Pole Position, Reptilian and Neondaze i.e. hard rock/metal with an 80:s touch. It’s melodic, it’s hard, it’s heavy. The music is mix and hybrid of bands like Queensryche, Europe, Iron Maiden, Rush, Ozzy Osbourne, Metallica, Seventh Key…(the list goes on). The album Water was recorded and produced by themselves and mixed by SinSonic, released October 2018. In 2020 Lars decides to release an updated version of 2008 album Neondaze. First single is Intoxicated, release date 4:th of October.