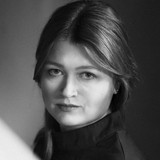 Marte Røyeng is a singer-songwriter and composer hailing from the Norwegian harbour town Horten. Her album debut Reach is produced by Even Ormestad, and recorded at Athletic Sound in Halden and at Albatross Recorders in Oslo. A voice genuine and clear, Marte Røyeng approaches pop music with a refreshing originality and eclectic musicality that has become her trademark. Her songs varies between the bluntly emotional and the intelligent and witty. She always leaves behind the sense of being inviting, yet somewhat secretive. She has previously made a solid impression on audiences and music critics with the release of her EP «No One» (2017),