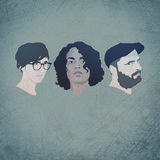 OAK is an indie-folk band from Quedlinburg, Germany. Imagine warm Blues mingled with straight Rock and melodious Pop music.   Jenny Fulton (voc, git), Konrad Eggebrecht (b, voc) and Conny Richter (dr, git, voc) join those genres playfully, time and time again searching for the minimal in their instruments to create a maximum sound experience – never abandoning the idea that even a small amount of spices can create a very tasty musical meal and that it's always the tune that remains between the listeners' ears.   OAK was founded by Jenny and Konrad in early 2012 shortly after they first met and realized that – despite their very different musical backgrounds (Blues and Hardcore) – they had lots in common, especially how their creation of original music takes place and how music can achieve so much with comparatively little brouhaha. They recorded their debut album "Light and Shadow" after only six months, not long before they felt the need for more percussion.   Thus, in early 2013, they were introduced to Conny and all three of them immediately felt something creative going on, so they went straight from the bar where they met to the first rehearsal. Three months later they played their first show.   Seven years and plenty of live shows later they finally released their first album as a threesome on 18th September 2020 – streaming from Spotify for the first time. Yeah. There's more to come. Just wait for it.   photographer: legrellgraphics www.listen2oak.com