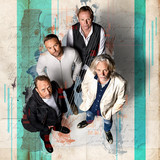 Wet Wet Wet announced in late 2018 that Kevin Simm (winner of ‘The Voice UK’ and former member of Liberty X) joined original members Graeme Clark, Neil Mitchell and Tommy Cunningham as the band’s lead vocalist. A newly invigorated Wet Wet Wet completed two huge UK tours and performed at some of Europe’s biggest and most prominent festivals including Isle of Wight Festival; Lytham Festival (performing alongside Rod Stewart); Party at the Palace; and Belgium’s Nostalgie Beach Festival. They also appeared as special guests of Phil Collins at a sold out show in Munich’s Olympic Stadium and performed with a 60 piece orchestra at the massive Bridge To Liberation event in Arnhem, Netherlands. Wet Wet Wet burst onto the scene in 1987 with their first single ‘Wishing I Was Lucky’ which started a three decade run of 27 Top 40 hits making them one of the most successful bands in British pop history, creating an incredible catalogue of songs that includes three UK No.1’s – ‘With A Little Help From My Friends’; ‘Goodnight Girl’; and ‘Love Is All Around’ - which set many chart records around the world.

Having sold in excess of 15 million singles and albums to date, Wet Wet Wet have featured in the official UK charts for over a colossal 500 weeks and their albums have been certified 20 x platinum in the UK alone (BPI). The band appeared on renowned BBC TV show Top Of The Pops an amazing 56 times, a record for a Scottish artist.