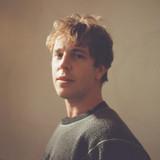 Away from all the noise of his various successes – 3 UK top 5 albums incl. the platinum-selling, chart-topping Long Way Down; 2 top 10 singles; a 2013 Brit award for Critic's Choice – there's one thing that's always kept Tom Odell grounded: songwriting. A classic songwriter - awarded a prestigious Ivor Novello for Songwriter of the Year in 2014 – relied on his passion more than ever when it came to crafting his new pop-leaning, emotionally-healing fourth album. The whirlwind around his debut had kickstarted a work ethic that became an obsession that culminated in crippling anxiety, leading to a dark period of mental health that stalked most of Odell’s 2018 and 19. Odell wrote his way through it, eventually letting down his guard and pouring out his feelings. These broader lyrical horizons needed to be matched by a musical expansion, with a lot of the songs on the new album leaning into a more DIY, electronic, bedroom pop sound. The love of this new direction chimed with the pandemic's arrival and songs were crafted in a more threadbare way around instruments he had at hand, like Moog synths. It was a move underpinned by both necessity and a desire to explore. Four albums into his career and Odell has made a record that feels free of expectation and of other people's perceptions of who he is as an artist. While darkness was the inspiration, this multi-layered, genre-bending pop album is full of light and hope, even in the strangest of times.