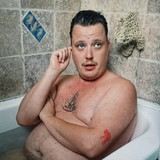 A traveller, an eccentric, a nomad – M. Rexen has been given many different titles. His music is just as colorful as his life story and having lived in the United Arab Emirates, Egypt and now in a Mongolian yurt in Copenhagen he has many places to call home. M. Rexen makes music completely freed from rules and expectations and since the release of his debut album ‘The United Kingdom Part 1 – Endless Sea of Honey’, his impressive productivity has birthed numerous experimental albums. One second you will hear tender guitar picking and whispering vocals, the next you are overwhelmed by Indian tabla, sitar and choirs. M. Rexen himself calls this unique sonic universe wildstyle music. M. Rexen and his eccentric musical universe has brought him many places and he has played Roskilde Festival and toured in Denmark with his eight man band. He has received widespread praise in Danish media such as Politiken, Soundvenue and Gaffa. In 2020 he drove through Europe in a customized car with a built in stage and wrote the Covid-19 inspired symphony ‘We The Sick’. M. Rexen has also played in the projects A Key Is A Key, Mongol and Den Magiske Ørn.