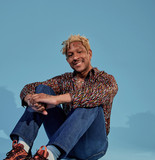 It's been just over a decade since the moniker ‘Mykki Blanco’ was created — first as a video art project portraying a teenage female character (inspired by Lil Kim’s ‘Kimmy Blanco’ alter ego) posting vlogs and raps on social media, but it inevitably evolved into a vehicle of self-discovery in the artist’s journey of forming their personal self-identity. One of the first Mykki Blanco tracks released was Wavvy in 2012, and it was on and popping from there. In the time since, they have pushed hip-hop to some of its most untethered bounds, melding noise and experimental elements with club and trap sounds, whilst also forging a uniquely subversive path within a genre historically entangled in a problematic ideological web of misogyny, homophobia, and transphobia. And while Blanco is widely recognized as a pioneering trailblazer in the so-called ‘queer rap’ sub-genre, the music of this new chapter represents such significant evolution toward eradicating the confines of genre categories and smashing any previous notion of the ceiling of their potential reach. As of early 2021, Mykki is signed with London-based Transgressive Records and the music of this new era introduces a more nuanced and genre-spanning set of work, suggesting the reflective wisdom of one who has experience and maturity on their side. After the last few years working with their Executive Producer FaltyDL plus the very wide cast of other collaborators, Mykki has two albums finished and ready — coming your way soon.