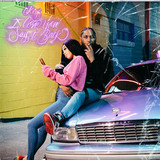 Coming from the Mecca of rap music, Atlanta, GA, KEY! is a hidden figure for the genre and city itself. KEY! was born and embedded in Atlanta, and has an obvious mark on the culture and music of the city, let alone rap music itself. KEY! is unapologetically himself 24/7. He has a specific way of going about life and navigating the world—constantly creating and never stopping the momentum towards reaching his goals. This combination creates a calculated KEY!. While KEY! is constantly being requested to record features on songs, he is currently evolving to reach the most elite level of creativity and production as a solo recording Artist. KEY! has one goal in mind: to win. 777 is KEY!’s Reasonable Doubt moment. This project is the cleanest, most commercial version of KEY! that he’s putting into the world. Working with only one producer Kenny Beats and excluding any features from the album, KEY! releases 777 as a project that depicts himself as an Artist in pure form... young, methodical, and a positive influence.