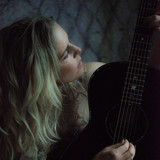 Folksingers don't usually make best-selling albums, but Sweden's Sofia Karlsson is an exception. Her breakthrough disc, Svarta Ballader (Black Ballads), sold a staggering 60,000 copies -- a huge amount for her homeland -- and brought her the Swedish equivalent of a Grammy. What made it especially remarkable is the fact that the songs were interpretations of poems by the Swedish poet Dan Andersson, hardly material with mass appeal. But Karlsson has always had her quirks. Born in Stockholm in 1975, her grandparents were her initial influences, with her grandfather playing accordion and her grandmother on the pump organ, while her mother reportedly often sang during excursions in the car. From then on, it was almost inevitable that Sofia would pick up a wide range of musical influences, from Dolly Parton to Lena Willemark. After graduating from the Royal College of Music in Stockholm, where she was a student in the folk music department, she landed a prestigious gig as vocalist with Groupa, one of the country's most lasting and innovative folk acts. She stuck with them for four years, until 2002, when she released her solo debut, Folk Songs. But it was Svarta Ballader three years later that really established her as a major artist, and she spent the next two years touring behind the disc before issuing her third album, Visor från Vinden (Songs from the Loft), which saw her delving into the repertoire of classic Swedish songs. In live performance, in addition to singing in front of a crack band that includes guitarist Roger Tallroth, Karlsson plays wooden flute and bouzouki. ~ Chris Nickson, Rovi