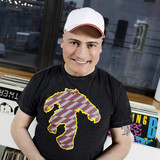 Danny Tenaglia has remixed and produced several sizeable club hits but still remains most well-known for his DJ residencies at the top New York clubs of the 1990s -- including Twilo (previously Sound Factory) and the Tunnel -- plus a spate of mix albums, several of his own LPs and a publicized feud with fellow super DJ Junior Vasquez. Raised in Brooklyn, he listened to Motown and the Philly sound as a child, and learned to play guitar and saxophone. At the age of 12, however, a friend introduced him to the world of DJ mixtapes and Tenaglia became fascinated with mixing techniques. He began hustling tapes on the street and, when he was old enough, hit the Manhattan club-scene with gusto. Coming of age in the late '70s introduced him to the club and DJ often cited as the best of all time, the Paradise Garage and Larry Levan. Tenaglia spent much time observing Levan, and began his own DJ career soon after. Though he moved to Miami in 1985 to escape a glut of New York DJs, he was back by 1990, right on the cusp of a new house renaissance led by producers like Masters at Work and Frankie Knuckles, and the output of Strictly Rhythm and Nervous Records. Tenaglia had begun producing in the mid-'80s during his spell in Miami (a single from his Deepstate project signed to Atlantic and he also worked with Murk'sRalph Falcon) so by the time of his return to New York, he was quite comfortable in the studio. Tenaglia productions began appearing on labels like Minimal, Sexy, Tribal and Strictly Rhythm; he really hit the mainstream with a 1993 remix of the Daou's "Surrender Yourself," a house epic which pioneered the harder underground sound which stormed Manhattan clubland (and therefore, most of America's dance scene) during the mid-'90s. With friend Junior Vasquez, Tenaglia was the city's most popular DJ and his residency at Twilo became legendary as the home of the most emotional dance music being mixed anywhere. Cementing Danny Tenaglia's connection with Tribal Records America was the 1994 club hit "Bottom Heavy"; it also led to abundant remix work for Madonna, Michael Jackson, Pet Shop Boys, Grace Jones, Jamiroquai, New Order and Lisa Stansfield, among others. His debut album, 1995's Hard & Soul, did well and Tenaglia hosted several Tribal mix albums, including two volumes in the Mix This Pussy series plus Gag Me with a Tune. His second proper album Tourism was released in 1998. Global Underground: Athens and Back to Mine followed in 1999. ~ John Bush, Rovi