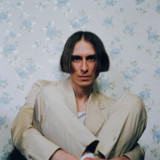 Raised in Philadelphia but currently based in New York, Baltra has spent the last decade honing a sound that’s rich on romance and melancholy. Releasing his first music in parallel with the lo-fi house explosion of the mid-2010s — and racking up millions of plays on YouTube and other streaming services in the process — Baltra has always had a restless approach and attention to detail that’s set him apart from many of his peers, often using his own voice (or that of collaborators, including Park Hye Jin and his wife Angela) rather than relying on samples, and exploring both higher and lower tempos on his 2019 debut album Ted. It’s fitting that his debut for Local Action — a five-track EP that marks some of Baltra’s most meticulously crafted but undeniably catchy work yet — is simply titled Ambition. Released on May 27, Ambition sees Baltra firmly cast his own vocals front and centre. Whether manipulated, such as on foggy opener ‘Make It B.I.G.’ and the down-tempo ‘Like a Butterfly’, or left comparatively bare on lead single ‘Baby’ and the EP’s closing track ‘Will You Be?’, Ambition showcases Baltra’s ability to write songs that are both effective in a dance music context but also transcend it. This isn’t to say Ambition ever strays too far from the dancefloor, however: ‘Work (It) Out’ is one of the most direct club tracks that Baltra’s released yet, harking back to his formative years DJing at New York warehouse parties. Local Action will release Ambition on May 27.