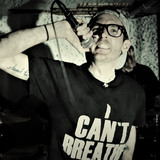 Singer/Songwriter and multi-instrumentalist Ryan Struck grew up in Northern New Jersey, cutting his teeth in various punk and hardcore bands through his teen years and early 20s. Over time, varied musical interests influenced him to write songs deemed unfit for such an abrasive format. The first full-length release "Live to Serve," was met with positive response from critics including an honorable mention on Jack Rabid's (Big Takeover) best of 2018 list. The Vinyl District called it "a brilliant bout of self-defeating wisdom," while Tattoo.com praised Struck's ability to "comment with stylish flair and clever lyricism on matters sublime and absurd." 2020, meet Scary Hours version 2.0. Struck has ditched "witty and unsettling anti-folk, informed by his past in hardcore punk bands" (Ghettoblaster Magazine) in favor of the more brazen sonic onslought of the hardcore and punk he grew up on. In May 2020, Pyrrhic Victory released the "incendiary and socio-politically on-target 'Bullet Fairy,' which rails against unchecked police brutality, especially against minorities" (Big Takeover) as worldwide tensions boiled over into the streets. In November 2020, Scary Hours returns with “Margins” (Pyrrhic Victory (US)/Engineer Records (EU) – an 8 song blistering hardcore punk attack that is full of anger, intensity and acute awareness and articulation, showing his evolution and grasp of the reality he lives in, his disgust for many aspects of it, and his desire to be a voice of change.