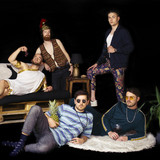 Did you know? Besides casinos and salad, Julian Caesar is known for inventing the disco. In ancient Rome they built huge concert halls, like the colosseum for instance, where people were dancing and partying until the break of dawn. Unfortunately, this tradition passed into oblivion throughout the middle ages. Nowadays, people stand around petrified, watching the party through the displays of their phones. But one noble band appeared on the scene to change that! The Knights of Caesar are here to make people dance again and to herald the start of the Renaissance 2.0. Bye, bye lethargy - hail Knights of Caesar!