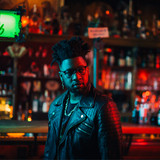 “Pillow” mixes a rather sad topic (missing somebody) with incredibly uplifting, infectious sounds that - seeing as it’s nearly impossible to listen to the track without immediately wanting to dance - make it even harder to handle the fact that clubs remain closed across most of the globe currently. Following his latest single “Don’t Let Me Go”, which entered the top 10 of the German radio charts, “Pillow” is the second release by Kelvin Jones which he has produced on his own; a creative freedom that has led to the manifestation of his very own signature sound.