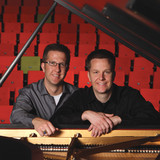 Tim & Ryan O'Neill, multi-million selling recording artists from New Prague, MN, have released over 50 albums of piano music in their relaxing, signature style. Their music has been streamed over one billion times by their fans across the world and they were recently inducted into the Minnesota Music Hall of Fame. The O’Neill Brothers have performed for several governors, US Presidents and have toured with pop superstar Deborah Gibson, as well as Katie McMahon, the original voice of Riverdance. The O’Neill Brothers have provided music for NBC, CBS, ESPN, PBS and HBO. Their PBS concert special, “Piano for Someone You Love,” was nominated for an Emmy award, and their music has topped the Billboard charts. Their wedding album 'A Day to Remember' is #1 in the USA. Publications such as the Los Angeles Times, Minneapolis Star Tribune, Southern Bride, Parenting magazine agree, describing their music as “reflective, soothing, soulful, and stimulating”. They rave about their “keyboard artistry” and love the "enthusiasm and charming character" of the two brothers in concert. The O’Neill Brothers’ albums include collections of holiday favorites, Irish songs, classic and original love songs, lullabies, movie and Broadway songs, patriotic music, familiar inspirational songs, and wedding music. You’ll find their lullabies on the popular playlist Baby Music 👶💗 and Double J's Piano Sleep. Make sure to follow us for more great instrumental piano music! www.pianobrothers.com