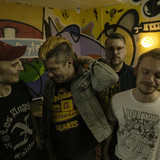 Sista Brytet was formed in 2010 when Fredrik Lindkvist (Vocals and Guitar) took a long break from Totalt Jävla Mörker to get back to the original punkrock. With a background in Knugen Faller was the the melodic punk handy. Along with Henrik Wiklund (bass) and Johan Fjellström (drums) as the band took small steps forward. It was in 2014, when Lars Kyösti (guitar) began playing in the band that all the pieces fell into place. Some influences are The Clash, KSMB, Buzzcocks, but also groups and artists like Masshysteri, Randy and Tranzmitors. On the album