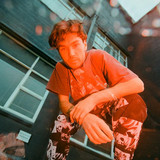 Adored by listeners from all corners of the internet and festival goers alike for his euphoric, energetic mix of left-field hip hop and sunny electronica; Kilter is the moniker for Sydney, Australia-based rising star Ned East. Having amassed over 40 million streams online and with his debut LP Through The Distortion (2017) receiving extensive praise, Kilter shows no signs of slowing down. Having quickly developed a reputation as a gun producer in the studio and enigmatic songwriter, Kilter propels his tracks into the live setting commanding one of Australia’s most engaging and spectacular live electronic performances. Flanked with a sea of synthesizers, controllers and drum-pads intertwining with acoustic percussion, Kilter’s set delivers on the promise of a live performance honed through extensive touring, performing to huge crowds at Splendour In The Grass, Falls Festival, Spilt Milk and many more, headline tours across the country and supporting acts such as Little Dragon and Hermitude. With his debut album in the rear view mirror, Kilter welcomed the New Year with a slew of international dates, delivering his infectious live performances to festivals and intimate club shows alike. As he returns home, it’s with a laser focus, channelling the experiences and energy garnered on the road into the next evolution of his sound. With a trajectory that’s only been going one way, we can only dream of what’s to come.