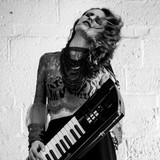 Ukraine-born Nastasia [Nas-TA-sya] is an eclectic multi-lingual singer and keyboardist, who began her career as Stacey Y, releasing a pop/r&b album Set the Water Straight. To explore her culture, she started the Ukrainian jazz fusion project Dovira, releasing three records: the 'Obrys' EP (100,000+ views on YouTube), the Dovira album (coined "world fusion at its best"), and the 2020 EP 'III' (DoVira's electronic trio off-shoot). Living in the global multi-cultural city of Toronto, Canada, Nastasia can be found singing in multiple languages (from Serbian to Arabic); she is a founding member of BLISK (all-female folk group), and the CEO of StereoFlavour (her entertainment company). She is about to come full circe, combining her Eastern European background with the music she fell in love with and studied in Canada... Look out for "SLAVIC SOUL".