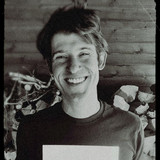 “Few are writing songs like Jackson Emmer.” – Rolling Stone He may be the best country singer you’ve never heard of. Jackson Emmer’s gentle, lush, raspy vocals stand out in the crowded field of Americana. Based in the small town of Carbondale, Colorado, Emmer began singing at the unlikely age of 20. However, due to the arid, mountain climate, and the rigors of long bar gigs, Emmer’s vocal cords were soon in tatters. By 28, he had lost his voice completely. Undeterred, Emmer saw this as an opportunity- a fresh start disguised as defeat. "I'm a quiet optimist. There is only one way: forward." Emmer says. He rebuilt his voice from the ground up, learned to sing again, and a new sound emerged- The scars of mountain living forever sealed into his timbre. Lush with overtones, ghostly harmonics, and friendly grit; Emmer’s voice is better than ever. His third studio album, Alpine Coda, places Emmer’s unique singing front and center. Recorded in just five days in Nashville, TN, and produced by the acclaimed Mary Bragg, Emmer’s latest work is his best yet. All ten tracks were either written or co-written by Emmer, and the songs display his award-winning blend of humor and heartache. Think George Jones meets Dan Reeder. Jackson Emmer has been touring and recording in the USA since 2009. He has performed at the Telluride Bluegrass Festival, Club Passim, Cactus Cafe, Rockwood Music Hall, McGonigel's Mucky Duck, The Bugle Boy, and The Grey Eagle, to name a few.