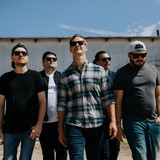 Years Later is a 5 piece modern alternative pop-rock/punk band based in Grand Rapids, Michigan. The group set out to hit the ground running by recording their first two singles in early 2020 with producer Seth Henderson (State Champs, Knuckle Puck, Real Friends), and released their first EP "Save Yourself" on 6/3/21. Years Later will return to Seth Henderson in July 2021 to work on recording their follow-up EP set to be released late 2021/early 2022.