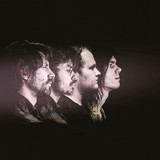 The Bohemes are a genrefluid guitar band from The Netherlands. Dex de Fijter, Nigel de Vette and brothers Gabriël and Léon Huisman have been playing together since 2020. The energetic four piece describe their sound as “poetic garage rock in a fur coat”. At the heart of their music is an insatiable desire for telling stories in the shape of songs. In July 2020, their first single `Von Fisennepark` was released under their own label. Due to Corona restrictions the single was recorded partly from the band members’ homes. Their second single `Would You?` is released on October 30.