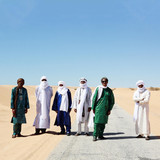 The story of Amadjar, the ninth Tinariwen album, begins at the end of October 2018, at the Taragalte Festival of nomadic cultures in the Moroccan Sahara. After a concert and a sandstorm, Tinariwen hit the road and head for Mauritania, via southern Morocco, Western Sahara and the Atlantic coast. The destination is important (the band have to set up and record their album there, and hook up with the singer Noura Mint Seymali), but no more so than the journey itself. Tinariwen are joined by their French production team, who arrive in old camper van that’s been converted into a makeshift studio. The journey to Nouakchott, capital of Mauritania, takes a dozen days or so. Every evening, the caravan stops to set up camp and the members of Tinariwen get to work under the stars – a whole lot better than being in a studio after all – to prepare for the recording, talking things through, letting their guitar motifs, thoughts and long buried songs come. Then, during a final camp in the desert around Nouakchott that lasts about fifteen days, to an audience of scorpions, the band record their songs under large tent. In a few live takes, without headphones or effects. The Mauritanian griotte Noura Mint Seymali and her guitarist husband, Jeiche Ould Chigaly, come to throw their musical tradition on the embers lit by Tinariwen – the curling vocals of Noura Mint Seymali on the song ‘Amalouna’ will become a highlight.