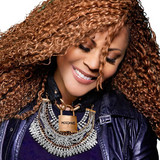 “One of the most influential women of Dance Music” - mixmag When you hear the name Crystal Waters, you immediately think of a 20 year brand and career that continues to engage and please her enormous fan base. In 2016 Billboard named her one of the most successful dance/club artists in the history of the US Billboard Hot Dance Music Chart. She is best known for "Gypsy Woman (She's Homeless)", “100% Pure Love” and the #1 European hit "Destination Calabria" with Alex Gaudino. Her accolades include 6 ASCAP Songwriter Awards, three American Music Award nominations, a MTV Video Music Award nod and four Billboard Music Awards. In 2012, “Le Bump” (Yolanda Be Cool) added another #1 on the Beatport House Chart. With DJ Chris Cox in 2013, the #1 Billboard Dance Chart Hit "Mama Hey“ was listed as one of Billboard's "Top 50 Dance Songs of 2013". In November 2015 Crystal released "Synergy", in October 2016 she released "Believe" both quickly rose to the # 1 spot on the Billboard Dance Chart garnering Ms. Waters 10 #1 Billboard Dance Chart hits and 11 top 10 ten hits. Her new single in 2017 with Hifi Sean, "Testify" went straight to the A List on BBC Radio . Released by Defected Records, Testify

garnered Ms Waters her 12th #1 Billboard Dance Chart Hit. Hifi Sean and Crystal are back with a song about the world we live in "Heavy"