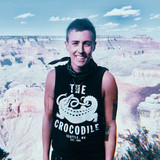 "Sad songs for fun times," is how songwriter John-Allison Weiss (they/them) describes the music they've been making for over a decade. From power-pop anthems to soft folky tear-jerkers, the genres shift but Weiss’s core values—raw honesty, undeniable hooks, and DIY ethos—run deep. In 2009, Weiss was one of the first artists to crowdfund a record through Kickstarter with their debut album and spent the next ten years quietly collecting cred on tour with rock legend Lou Reed, writing with heroes like Tegan Quin and Kevin Devine, and cultivating a community of diehard fans across the globe. They released two more albums before coming out as trans and in 2020 they moved into a travel trailer and set out on a never-ending journey of self discovery. Through a global pandemic, the end of their marriage, and a search for home, Weiss wrote, recorded, and fundraised their most ambitious album yet with plans to self release songs starting in fall 2021 through their own label Lower Key Music.