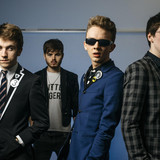 Upon their arrival, the Strypes attracted as much attention for their members' ages (between 16 and 17) as they did for their influences (Dr. Feelgood, Rockpile, Howlin' Wolf, and the Yardbirds, among others). The Cavan, Ireland group began in 2008, when Evan Walsh, Pete O'Hanlon, and Josh McClorey began jamming at Walsh's house after being inspired by their parents' music collections. With Walsh on drums, O'Hanlon singing, and McClorey on guitar, an early version of the Strypes -- whose name was inspired by the creatively misspelled monikers of '60s bands such as the Byrds -- also featured bassist Jack Hayden and guitarist Conor Bates. This lineup made its debut at Farnham National School and played gigs around the area for a few months until Hayden and Bates departed. O'Hanlon switched to bass and the Strypes continued as an instrumental trio until they discovered vocalist/harmonica player Ross Farrelly opening for one of their shows. With its lineup complete, the band honed its own songs as well as covers in concert for a few years, then self-released Young, Gifted and Blue, a four-song EP of covers, in April 2012. Supported by a video shot by a former babysitter for their version of Bo Diddley's "You Can't Judge a Book by the Cover," the EP reached the top of the digital charts the day after release. The Strypes' independent success sparked attention from labels, and after joining Elton John's Rocket Music management company, they signed to Mercury Records late in 2012. Around this time, the band's gigs in the U.K. earned them other big-name fans, including Noel Gallagher, Jeff Beck, Paul Weller, Dave Grohl, and Roger Daltrey. March 2013 saw the release of their first single for Mercury, "Blue Collar Jane," and that June the Strypes supported the Arctic Monkeys on that band's tour through the U.K. and Germany. The "What a Shame" single followed in July, with the band's first full-length, Snapshot (which they worked on with Beatles and Sex Pistols producer Chris Thomas), arriving in September. After touring Snapshot through 2014, the group recorded its second album, Little Victories, which appeared in August 2015. Another round of touring followed through 2016 and the band returned in June 2017 with its third album, Spitting Image. ~ Heather Phares, Rovi