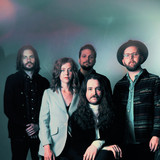 Birdtalker released their debut album One in 2018 which met critical acclaim, featuring their breakout single “Heavy,” which has now amassed over 80 million streams on Spotify alone. Now, with the release of their self-titled sophomore album, they have come into their own with their most confident and unrestrained set of songs to date. Fronted by Zack and Dani Green, along with Brian Seligman (guitar), Jesse Baker (bass), and newcomer Chris Wilson (drums/percussion), Birdtalker explore how to navigate the unknown, embrace uncertainty, and learn to let go.