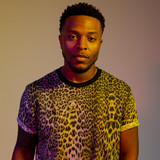 FLAME is a GRAMMY® nominated and Stellar Award-winning hip-hop artist. He is a well-versed leader in the Christian hip-hop scene with a growing list of accolades, including a GRAMMY® nomination, multiple Billboard chart toppers, and several Dove and Stellar Award nominations. He was born and raised in the inner city of St. Louis, MO. He has released 9 albums to date including Captured (2010), The 6th (2012), Royal Flush (2013), Forward (2015), and Stellar Award winning God Knows (2018) under his own imprint. His latest releases include three EPs titled, Extra Nos, DayBreak, and Christ For You. For over a decade, FLAME has traveled throughout North America & the Caribbean, Africa, Europe, and Asia performing music that has impacted the masses. In addition to touring, writing, recording and co-producing his own projects, FLAME founded and helms Clear Sight Music, a burgeoning record label raising the bar in Christian hip-hop and beyond. He has a Master’s degree in theology with a minor in counseling. FOLLOW