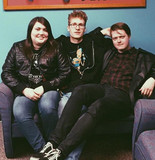 The Carousers are a punk trio hailing from Long Branch, NJ. The band was established in 2016 and is made up of guitarist/vocalist Joey Affatato, bassist/vocalist Cassidy Crosby, and drummer Andy Jackle. In 2017, they released their debut self-titled EP, recorded by Sean Glonek (Frank Black of The Pixies, Juliana Hatfield, Matthew Sweet, Argyle Goolsby) of SRG Studios. They then released an alternate master of their song "Halloween Night" in 2019,