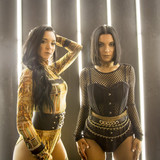 Hailing from the east coast and now based in Los Angeles, sister duo Duelle is most widely known for their unique performances which merge live vocals, high energy melodic rap, singing and dance choreographic movement. The duo has entertained fans as DJ's at festivals such as TomorrowWorld, Sunset Music Festival, Marquee Las Vegas, Avalon Hollywood, Life In Color and Dancefestopia performing alongside DJ Snake, Skrillex, The Chainsmokers, Shaq (DJ Diesel), Waka Flocka Flame, Ludacris and Juicy J just to name a few. Their songs have appeared on major TV shows such as Keeping up with the Kardashians, Total Divas and more. With 3.5 million streams on Spotify to date, the sister group was just getting warmed up and are now ready to reach a new level with plenty of big records in the vault. From their unique lavish style to the current sound inspired by their Italian roots, the girls are taking a bold female empowerment stance as they reinvent themselves. Coinciding with the new branding, Duelle expresses lyrics that promote self worth, respect and loyalty.