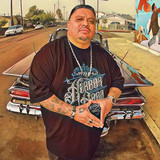 This multi talented artist, producer, and C.E.O known as Seven aka Sevens Muzik, got his foot in the game originally as a freelance producer working for independent and major labels such as, Sony Music, Ruthless Records and the infamous Death Row Records. Seven began his passion for music growing up on the sunny streets of Southern California bumping legendary sounds of the originators of west coast rap, N.W.A, ATL, Dr. Dre, Dj Quik, and of course the ever so present sound of 60's, 70's, and 80's oldies and old school funk. Highly influenced by the combination of the music and the street lifestyle, it lead to the creativity expressed in his tracks, that bring back that rhythmatical flow of real life. Having the opportunity to work with many major and independent artists along the road due to his success, he soon began to develop his own rap style which he combined with a little singing. Now after perfecting his talents, he has evolved into one of today s hottest artists in the independent game. www.sevensmuzik.com Sevens Muzik