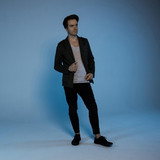 Kujah is a producer and multi-instrumentalist from Stockholm, Sweden. A former guitarist in different Rock & Pop bands, he started the project for the freedom of making any genre. The music is Melodic and Melancholic, often featuring organic instruments and ranging from EDM Trap music to House, the sound is continuously evolving. Since the debut in 2018 he has released music with record labels and curators such as Trap Nation, Chill Nation, Nightblue Music, Magic Records, Deep Universe and has been featured on TV shows such as ‘Keeping Up With The Kardashians’. With more than 6.000.000 streams on Spotify alone he is now also curating the new playlist Sad Bass. Follow and Stay tuned as many more records will be coming in 2021.