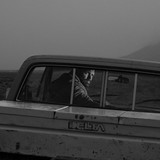 “This feels like a new phase for Straight White Teeth, a new approach that’s paying dividends; like the song title [Flowering], this a musician on the verge of coming into full bloom.” - For The Rabbits ///On Costilla, the forthcoming album from Straight White Teeth, musician and writer Patrick McGuire exchanges sardonic synth-laden indie pop for sincere acoustic guitars and lush layered vocals to build affecting songs that are shaped by the comfort of nostalgia as much as they are by modern dread. With an unapologetic penchant for the pensive folk music of Nick Drake and Elliott Smith, McGuire croons about a surreal, real life encounter with a dog, suffering through a serious bike accident in Philadelphia, and criss-crossing North America in search for a home. Featuring new interpretations of previously released songs like “Flowering” and “The Night Washes Its Face” along with new tracks, Costilla weaves together a disparate array of folk sounds and stories personal and imagined into a singular earnest musical statement marked by its startling intimacy and bucolic, windswept grandeur.