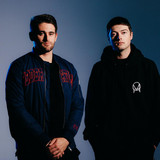 Lee Mvtthews, aka, Graham Matthews and Tom Lee met in 2012 and started working together after discovering they had a nearly identical taste in music, eventuating in Lee Mvtthews in late 2013. Since then, they’ve gone from strength-to-strength, gaining a reputation for turning out infectious tunes that pair colourful melodies with bass-driven drops, garnering them plays from industry greats such as Andy C, Sub Focus, Pendulum, Netsky, Metrik, Grafix, Koven, Kanine, K-Motionz, DC Breaks, and Hybrid Minds. They have become a favourite on the New Zealand festival circuit, playing at the likes of Rhythm & Vines, Northern Bass, Homegrown & Summer Classic as well as headlining shows up and down the country. In addition to this, they have become a go-to support act for an array of international talents, including Wilkinson, Netsky, Kanine, Grafix and more. Their hard work hasn’t gone unnoticed,

winning Best Electronic Artist at the coveted Aotearoa Music Awards in 2020 as well as Best Artist 2 years running at the George FM awards, where they have also taken out several top spots including Biggest Banger and the DNB Hundy countdown.  Their efforts have landed them on labels such as UKF, Viper Recordings, DeVice & Dark Machine Records, cultivating in a staggering 15 million streams. Growing exponentially and with more new music ready to go for the latter half of 2021, it seems nothing can stop these two as they hold their spot as one of the hottest New Zealand drum & bass acts.