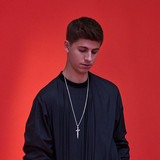 geez, pro written bios are such a drag to read. here's a about me: my name is Steve James, i'm 22 years old from Johnstown, Pennsylvania and i like making catchy music, usually dance or pop but also... fuck genres  My first productions were when i was 12 or 13, inspired a lot by Avicii and Afrojack. In 2014 i did a remix of ZHU’s “Faded” for $1, and it ended up topping Hype Machine and and becoming one of SiriusXM BPM's top songs of the year. After a boatload of other remixes, I went to LA in 2015 and met Poo Bear ,Justin Bieber's main writer, and we co-wrote “Purpose” the title track of Bieb's 2015 album.   I subsequently took my GED that fall and moved to for the 5 craziest years of my life. In my bedroom studio in K-Town I made a drop that turned into Martin Garrix and Bebe Rexha's triple-platinum banger, “In the Name of Love”. I toured with Martin in Ibiza and Vegas, i played shows with The Chainsmokers, Matoma, & Oliver Heldens, while releasing my first few original works "Renaissance," "In My Head (ft. RKCB)" and "Warrior (feat. LIGHTS)" I continued to work with artists like Little Mix (“Power (feat. Stormzy)”), The Vamps (“Middle of the Night”), Andy Grammer (“Best of You (with Elle King)”), and the Backstreet Boys (“Nobody Else”).   My debut EP, +One came out in full by January 2020 with one of my favorite songs, fall for you. Wanting more control & freedom to do what i love, i moved back to pennsylvania to start my own label: Butter Beats. thanks for listening <3