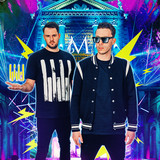 After meeting up in 2007, Willem van Hanegem and Ward van der Harst came together to form W&W and haven’t looked back since. The Dutch DJ and production duo have transcended the boundaries of genres and traversed the world with their globally acclaimed music and iconic live performances, becoming one of the most sought-after duos the world of electronic music has to offer. As DJs, W&W have been dominating dance floors and festivals across the globe for years on end. Voted #14 in DJ Mag’s Top 100 DJs poll in 2018, they continually perform at leading festivals such as Tomorrowland and EDC, and even had their own headlining tour this year. W&W continue to prove their status as innovators and tastemakers in the scene under their alias NWYR, where they release blistering productions and live sets from their trance-inspired roots. They also curate music for their brand-new label, Rave Culture, which includes hosting their own bi-weekly radio show on Dutch broadcasting station SLAM!, which has gained them over 300,000 listeners per show plus coverage across North America via SiriusXM. Now shifting into a new phase with a tidal wave of new productions and incinerating live sets, the rise of their new Rave Culture label and the impact of their NWYR alias, W&W are cementing their place amongst dance music’s top acts in signature style: transcending boundaries and never looking back.