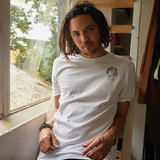 London based artist, multi-instrumentalist and producer. Born and raised in Buenos Aires. Jazz and red wine lover. --- Lucky Bamba is a London based artist, multi-instrumentalist and producer.   From the likes of some of London’s new wave most important characters, his sound alternates between Jazz, R&B and Pop. Soft and shimmery guitar arrangements create a unique soulful and smooth sound. His voice and his 335 guitar are his best allies when it comes to portraying his life and adventures as a multicultural songwriter.    In 2015 he attended Berklee College of Music in Boston, where he officially launched his musical career as a performing artist and composer. In the following years he toured Europe as a performer with different jazz bands and worked on his identity as a songwriter while he travelled the continent.   In 2018 he moved to London to develop his solo career as Lucky Bamba. Working side by side with producers such as Chris Kimsey (The Rolling Stones) and Miles Showell he has been releasing multiple singles and performing around the UK. His debut album will be released in 2022. "Such a nice sound, nostalgic vibes!!" - Soho Radio, London UK "Really liking his sound" - Vibe 107.6 FM, Watford UK "He's a good kid" - Lucky Bamba's Mom, Buenos Aires AR