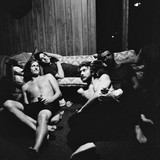 FayRoy started in an old cottage on Indian Rocks beach. The cottage is not only the namesake, but the muse for the early songs written from within its walls. There is a certain ethereal energy the comes from spending time at FayRoy that is as spooky as it is calming. Their debut self-titled album is a testiment to that energy. After a three year whirlwind of uprooting to the San Francisco Bay Area and self booking their first national tour (which lead to a stolen van stranding them in Chicago with only the shirts on their backs) FayRoy find themselves back home in Tampa's Bay Area. Developing their sound under the influence of past traumas, new relationships, and the burgeoning garage rock scene in St. Petersburg.