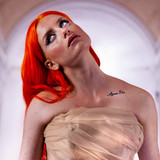 Follow my journey on instagram/tiktok @agneshustler 🧡 Stockholm-based Agnes Hustler’s rich voice , orange hair and enchanting visuals have become the features that signify her as a fearless artist with a wide range of influences and make her stand out on today’s pop scene. Since her debut single 'My Atmosphere' was released in 2019 Agnes has continuously impressed the audience with the amplitude of her singing, songwriting and production skills. The release of her debut EP 'Songs to a Nation' was followed by her first tour as a solo artist in Sweden. Her music has been called a "Masterpiece" and "on her way to become a Powerhouse in Swedish Pop" in international magazines such as Bands of Tomorrow and Le Futurewave. Working as an actress alongside her music career, Agnes's visual content is an essential part of her music and artistry - she directs her cinematic videos herself. “What I like about Agnes is that she’s fearless and explores different expressions in music and in her voice - great singing efforts in a wide register as well as rap.” - Fredrika Johansson, Radio Sweden Bookings agneshustler@gmail.com