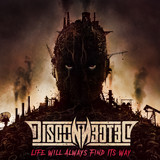 Disconnected is a modern metal band drawing many influences like Avenged Sevenfold, Gojira & Alter Bridge.   The band was created back in 2012 by lead guitarist & composer Adrian Martinot. After struggling for a few years finding the right lineup, the band finally find balance when joined by lead singer Ivan Pavlakovic, then followed by Romain Laure, Florian Merindol and Jelly Cardarelli in 2018.   They released their debut album White Colossus in March 2018 through indie record label, Apathia Records on all major streaming platforms with physical releases in Europe and Japan.   After playing numerous gigs in France they opened for Tremonti on his 2018 European tour playing a further 24 gigs across 17 countries. After that the band were invited to open for Judas Priest in January 2019. Disconnected also supported Mass Hysteria in March and November 2019.   The band is also booked to play on big European festivals for the summer 2020, such as Rock Fest in Barcelona, Cabaret Vert in France etc....   They are currently recording their second album , and just about to release a first single : « UNSTOPPABLE »