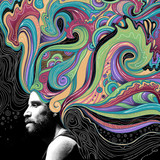 Mat McHugh is an Australian musician who has built a sizeable fanbase around the World through old fashioned word-of-mouth and musical / lyrical integrity. Raised in Sydney, by the beach, his music is a mix of bass heavy rhythms with elements of dub, folk, soul, jazz, hip hop and lightning bolts. 3 Gold records, 400 thousand albums sold ( all completely independently ), over 75 million streams and numerous awards and nominations in his home country. Mat has toured with Chris Cornell, Fat Freddy's Drop, John Butler Trio, Citizen Cope and Sublime with Rome as well as appearing on some of the World's biggest Festival stages such as Bonnaroo, Bluesfest, Splendour in the Grass and the Hurricane/Southside Festivals in Germany.