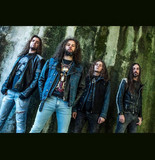 Bullet-Proof is an italian heavy/thrash metal band, formed in august of 2014 by Richard Hupka (vox,gtrs) and his son Lukas (drums). Right from the start the only intent is to go fast but maintain strong moledies at the same time. Two releases so far: the debut album De-Generation (2015) and the succesful Forsaken One (2017). Both of them released via Sleaszy Rider Records. Since the beginning it’s being very appreciated by both critics and fans. The band keeps on playing a lot of shows across the europe, sharing stages with names like Testament, Raven, Graveworm, Holocaust, Tygers Of Pan Tang, to name a few. Right now the band is finishing their third album.   https://linktr.ee/bulletprooftm