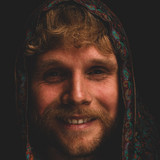 Some say Sweden's Johanan sounds like the lovechild of Paul Simon and James Blake. Some say they have some of the cultic live appeal of The Grateful Dead, with traces of The Mars Volta and Sufian Stevens in the music. Some say they've never heard anything like it. If you ask Johan, composer, lead singer and chieftain, he hopes that some of the most evident aspects of the music are a feeling of intimacy and the hope that inevitably follows in the wake of

unconditional love. "I have been put to death and co-resurrected with with love itself. All my vain and prideful endeavors to "find myself" or to attain a sufficient level of peace of mind or happiness were just as sounding brass; hollow and unsustainable. I am stupefied and slain by the truth, a jolly bondservant of love, mystically awakened, knowing no fear. In this omnipresent light, death is revealed as a conquered lie, a mere, though sever, identity crisis spawned in a smoke and mirrors game."