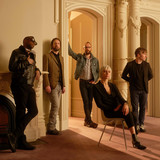 Led by the enigmatic Murray Lightburn, the Dears are a loose collective of Montreal-area musicians formed in 1995. Their approach has evolved from orchestral-style pop to a more intimate chamber pop sound and then into a more compact but melodically sophisticated indie pop style, all featuring cabaret-style vocals and a dour lyrical mindset reflecting the influence of Serge Gainsbourg, one of Lightburn's avowed favorites. While keyboard player Natalia Yanchak (who is also Lightburn's spouse) has been working with the Dears since 1998, the remaining lineup has been something of a revolving door, with more than 20 other musicians having been part of the Dears during their lifetime. 2004's No Cities Left was one of the band's first critical successes and represented their widescreen sound, while 2008's Missiles stripped the lineup down to just Lightburn and Yanchak and a handful of guests. 2011's Degeneration Street was an exercise in refined but emotionally sharp rock, and the two-volume Times Infinity (Vol. 1 was released in 2015, Vol. 2 followed in 2017) was more musically intimate while still emotionally intense. Vocalist, guitarist, and songwriter Murray Lightburn began writing and recording material under the name the Dears in 1995, originally joined by guitarist Richard McDonald, bassist Andrew White, and drummer John Tod. This edition's output would later appear on the 2001 collection Nor the Dahlias: The Dears 1995-1998, but in 1998 Natalia Yanchak joined the group and their recognizable style began to take shape. 2000 saw the release of their debut album End of a Hollywood Bedtime Story. After issuing a pair of EPs -- 2001's Orchestral Pop Noir Romantique and 2002's Protest -- the Dears' second proper album, No Cities Left, appeared in 2003, and enthusiastic reviews helped the LP become a modest commercial success in the United Kingdom, while the group's intense live shows helped them win a cult following in their native Canada. A live album, 2004's Thank You Good Night Sold Out, documented their No Cities Left tour, and the following year, Lightburn and Yanchak were wed. As tensions within the group led to a number of resignations, the Dears' stripped down their sound for 2006's Gang of Losers, which was nominated for the Polaris Music Prize and charted in Canada and the United Kingdom. 2008's Missiles was cut with a number of studio musicians joining Lightburn and Yanchak, while members of the group Pony Up were recruited to perform with the Dears on tour. 2011's Degeneration Street was another critical success which found several former Dears collaborators returning to the fold; the album found them once again nominated for a Polaris Music Prize. The group's next recording project was an ambitious double set; while the two albums were recorded at the same time, Times Infinity, Vol. 1 was released in 2015, and the companion album Times Infinity, Vol. 2, came out two years later. The Dears were back with 2020's Lovers Rock, which featured contributions from Sam Roberts, Alex Francoeur, and the E Street Band's Jake Clemons. ~ Mark Deming, Rovi