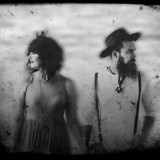 The Union Revival (Aaron and Amanda Konzelman) both grew up in Waco TX. They met in college in a music performance class and started singing, writing, and performing together around Texas. over the last 15 years, they have traveled the US, South America, and Europe. In 2014 they began to write country and folk/Americana for Platinum Pen Publishing in Nashville, TN. They're modern storyteller/folk rock sound with a bit of Americana and acoustic rock vibe weaves vivid storytelling with haunting melodies Their musical style draws influence from Johnny Cash, Allison Krause, Mumford and Sons, Chris Stapleton, The Civil Wars, Anaïs Mitchell, Patty Griffin, and Ray LaMontagne. “14 years of writing, giging, burning up the roads into the early morning, being rich, being broke, having plenty, and having nothing, married for thirteen years and moving 10 times...to tell the stories of this crazy journey.... and we wouldn't change a minute or a single breath of the journey to HERE.”