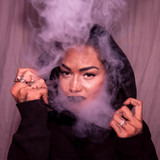 Penny Purr also known as “Mama Purr” is a Perth (Australia) based rapper, singer and song writer from Whangarei, (New Zealand).   Penny’s journey into the music scene was unique, beginning in burlesque in 2014 and transitioning into spoken word which sparked her evolution into music. By 2016 she began working with local legends Rob Shaker, Optamus and Uncool Sam. Performing across Australia, Penny has been a support act for many names and events including:   Fringe Festival Rappers vs comedians Drapht Scribe Downsyde Tuka Wombat Bitter Belief Complete Mad Fap Drop Spot Just to name a few.   She has been described as having an explosive stage presence with a commanding energy and an empowering message for women. In 2020 she dropped her new EP Queen of The Damned followed by a stack of collaborations and singles.   Triple J unearthed reviewed her latest releases, Creeping and Tequila Floor feat. Coerce -   “Big Vibes on this one from Penny Purr. Natural charisma behind the nimble raps” - David Howe   “OLD SCHOOL HIP HOP ENERGY!! Far out I was taken back by these bars, every single time I heard a lyric!! I’m excited for more PENNY PURR! This track is epic!” - Tom Forrest   With a plethora of new projects in her back pocket, Penny is making it her ultimate goal to represent Western Australia and more importantly, women in hip hop.